The Gift of Speaking in Tongues 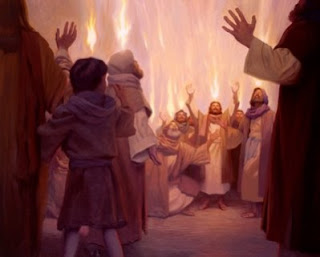 Over a hundred years ago, at Charles Fox Parham’s Bethel Bible College in Topeka, Kansas, the question was put forth to the students for consideration as to what was the initial evidence of receiving the baptism with the Holy Spirit, based on the biblical accounts of what happened in the first-century church. After three days of considering this, the students concurred that if any individual were to receive the baptism with the Holy Spirit, the initial evidence would be speaking in tongues.

Parham opened other Bible schools, including one in Texas, which led to Lucy Farrow speaking in tongues, and by 1906 an estimated 13,000 others also received this gift at Bonnie Brae Street in Los Angeles, California. This was just the beginning of what later became the Azusa Street revival in Los Angeles, California, which took place at the Azusa Street Mission under the leadership of William J. Seymour with the assistance of Lucy Farrow. By 1909, an estimated 50,000 people had received this experience of speaking in tongues at that particular location. Of course, all of this was the beginning of what became the modern, worldwide Pentecostal movement.

Please take a look with me at the Scriptural basis for speaking in tongues as the initial evidence of the Holy Spirit baptism.

The Day of Pentecost
In Acts 2, when the 120 disciples were baptized with the Holy Spirit, they all spoke in other tongues.

"When the day of Pentecost came, they were all together in one place. Suddenly a sound like the blowing of a violent wind came from heaven and filled the whole house where they were sitting. They saw what seemed to be tongues of fire that separated and came to rest on each of them. All of them were filled with the Holy Spirit and began to speak in other tongues as the Spirit enabled them." (Ac 2:1-4, NIV).

The Outpouring in Samaria
Then there was the incident that took place in Samaria, as recorded in Acts chapter 8, in which those who had earlier believed through the preaching of Phillip received the baptism with the Holy Spirit when the apostles Peter and John laid their hands on them.

"When they arrived, they prayed for the new believers there that they might receive the Holy Spirit, because the Holy Spirit had not yet come on any of them; they had simply been baptized in the name of the Lord Jesus. Then Peter and John placed their hands on them, and they received the Holy Spirit. When Simon saw that the Spirit was given at the laying on of the apostles’ hands, he offered them money and said, 'Give me also this ability so that everyone on whom I lay my hands may receive the Holy Spirit.'” (Ac 8:15-19, NIV)

1. The apostles prayed for the new believers there that they might receive the Holy Spirit, because the Holy Spirit had not yet come on any of them; they had simply been baptized in the name of the Lord Jesus.

2. The new believers received the Holy Spirit through the ministry of Peter and John when the apostles laid their hands on them.

3. When Simon saw that the Spirit was given at the laying on of the apostles’ hands, he offered them money. This means there was observable evidence that Simon could see when the people of Samaria received the Holy Spirit. We should understand from the context of Acts 2 that in this passage the powerful evidence Simon saw was the people of Samaria speaking in tongues. He was willing to pay money so that everyone on whom he would lay his hands might receive the Holy Spirit like that. If it was some quiet experience in which you could not be sure anything at all had happened, then this former sorcerer would not have sought to buy such an ability like he did.

The Home of Cornelius
Later, in the home of a Roman centurion named Cornelius, the same thing happened while the apostle Peter was preaching.

"While Peter was still speaking these words, the Holy Spirit came on all who heard the message. The circumcised believers who had come with Peter were astonished that the gift of the Holy Spirit had been poured out even on Gentiles. For they heard them speaking in tongues and praising God." (Ac 10:44-46, NIV).

The way that Peter and the other Jewish believers with him knew that "the gift of the Holy Spirit had been poured out even on Gentiles" was that "they heard them speaking in tongues."

When Peter later explained his actions to the elders in Jerusalem, he said this:

“As I began to speak, the Holy Spirit came on them as he had come on us at the beginning. Then I remembered what the Lord had said: ‘John baptized with water, but you will be baptized with the Holy Spirit.’ So if God gave them the same gift he gave us who believed in the Lord Jesus Christ, who was I to think that I could stand in God’s way?” (Ac 11:15-17)

2. Peter understood this to be the fulfillment of the Lord's own words when He had said, "you will be baptized with the Holy Spirit."

3.  God gave the Gentiles the same gift he gave the Jews who believed in the Lord Jesus Christ, namely the 120 who had been gathered in the upper room in Acts chapters 1 and 2.

The Outpouring in Ephesus
Another incident that is recorded in Acts is what happened to the believers in Ephesus. "And when Paul had laid his hands upon them, the Holy Spirit came on them, and they began speaking with tongues and prophesying." (Act 19:6)

1. Paul laid hands on them.

2. The Holy Spirit came on them.

3. They began speaking in tongues and prophesying.

Jesus' Teaching on Speaking in Tongues
In fact, the Lord Himself taught on speaking in tongues right in the gospel of Mark. He said, "And these signs will accompany those who believe: In my name they will drive out demons; they will speak in new tongues; they will pick up snakes with their hands; and when they drink deadly poison, it will not hurt them at all; they will place their hands on sick people, and they will get well.” (Mk 16:17-18, NIV). He clearly and explicitly said that these signs would accompany those who believe in Him, including speaking in new tongues among all the other ones He mentioned. This is a promise from the Lord Himself that you can count on. Why don't you take Him at His word and claim this promise for yourself?

Paul's Teaching on Tongues
Just as the Lord did, the apostle Paul also taught that we should all speak in tongues, while he acknowledged that not all believers do so. He stated that:

2. "Anyone who speaks in a tongue does not speak to people but to God. Indeed, no one understands him; he utters mysteries by the Spirit." (1 Co 14:2) This means you utter mysteries to God when you speak in tongues.

3. "Anyone who speaks in a tongue edifies himself." (1 Co 14:4). This means you edify yourself when you speak in tongues.

4. "For if I pray in a tongue, my spirit prays, but my mind is unfruitful. So what shall I do? I will pray with my spirit, but I will also pray with my understanding; I will sing with my spirit, but I will also sing with my understanding." (1 Co 14:14-15). This means that when you pray in tongues, your spirit prays, but your mind doesn't understand what you are saying. That is why Paul said he would (and we should also) pray in the Spirit and with our understanding in our own native language.

Ask for the Gift of the Spirit
Jesus taught us to ask for this gift.

“So I say to you: Ask and it will be given to you; seek and you will find; knock and the door will be opened to you. For everyone who asks receives; the one who seeks finds; and to the one who knocks, the door will be opened. Which of you fathers, if your son asks for a fish, will give him a snake instead? Or if he asks for an egg, will give him a scorpion? If you then, though you are evil, know how to give good gifts to your children, how much more will your Father in heaven give the Holy Spirit to those who ask him!” (Lk 11:9-13)

Attribution notice: Scripture quotations taken from The Holy Bible NIV, copyright Zondervan, used by permission. Tongues of Fire image may be copyrighted, used for educational and commentary purposes under the Fair Use Act.

Author's note: If you enjoyed this post, you may also like the other posts in this blog available through the Main Directory for this blog at Home, such as Baptized with the Spirit, Holy Fire Baptism, The Laying on of Hands, Gifts and Fruit of the Spirit: What's the Difference?, and Supernatural Power for All Disciples. You may also access my complete blog directory at "Writing for the Master."

Len Lacroix is the founder of Doulos Missions International.  He was based in Eastern Europe for four years, making disciples, as well as helping leaders to be more effective at making disciples who multiply, developing leaders who multiply, with the ultimate goal of planting churches that multiply. His ministry is now based in the United States with the same goal of helping fulfill the Great Commission. www.dmiworld.org.
Posted by Len at 6:45 PM